For a while I've been wanting to purchase some art, especially some word art, for around the house.
Stuff kind of like this. Cute, right?

Well, for the last few months I've been playing around with watercolour paints. I haven't done anything major, like I said, just kind of dabbling. However, I thought it might be kind of fun to see if there was anything that I could come up with that involved some word art and watercolours.

I decided to use this quote: 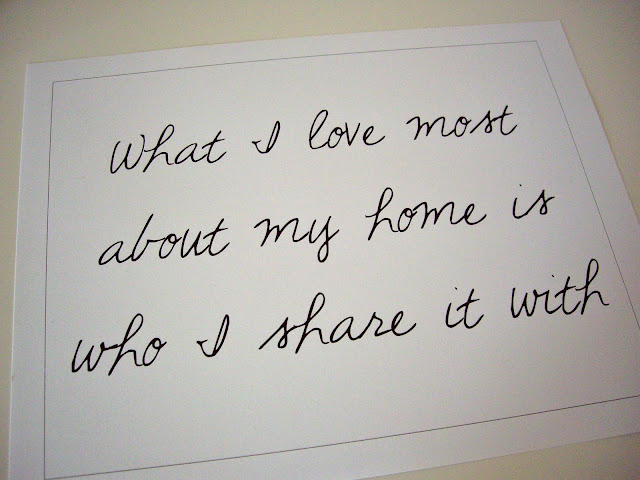 We've all seen it pretty much everywhere, but I like it because it's true for me.

At first I printed the quote on card stock in a font that I liked and thought I would paint around it.
Then I had a change of heart and decided that I would first paint my {very simple, I may add} watercolour design on the card stock and then once it was dry put it through the printer. I chose to go with different green tones. I was going to go for the ombre effect but then kind of messed up. So it's completely random and is basically just a blend of different greens.
Have I mentioned green is one of my favourite colours? 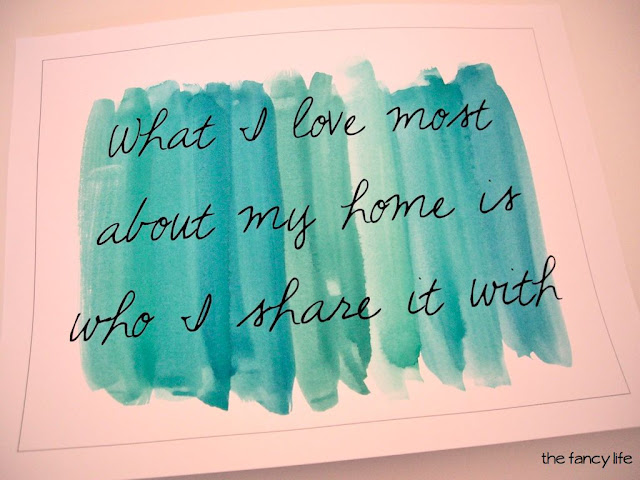 I was actually rather shocked that it came out the way it did and I must say that I rather like it.
I then found a white frame at the Dollarama for $2. Since I had the card stock & paints on hand this project only cost me $2 plus tax. Not too bad at all.

And here it is all framed and ready to be put on a wall somewhere... 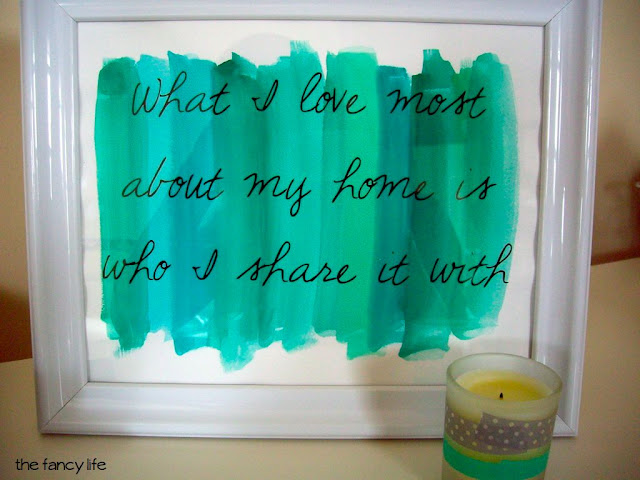 You'll notice that the one in the frame is different than the previous one. That's because in order for it to fit in the frame I had to cut it down. And of course, I ended up cutting it too small. I don't know what I was thinking, but it ended up being smaller than 8x10. Since I didn't have any mats on hand that I could add to the frame and I didn't have any smaller frames I just ended up making another one.

I'm still not 100% sure where I'll hang this yet. I had thought about the entryway but then realized that for it to fit on the wall above my dresser it would need to be hung vertical, and I didn't really feel like making a third {although it may come to that, haha!}. I'm thinking though that it might be a nice addition to the gallery wall in my living room. It'd be a great pop of colour too!

I'll be sure to share where it finds a home.

Have you made any art for your home recently?

Thanks so much for stopping by & taking the time to comment! I love hearing from you!

Leanne
I'm Leanne. Wife & mom. Canadian. A fan of all things home, design & decor. I love tackling DIY projects and making spaces beautiful. Thanks for stopping by to share a little glimpse into our Fancy life!